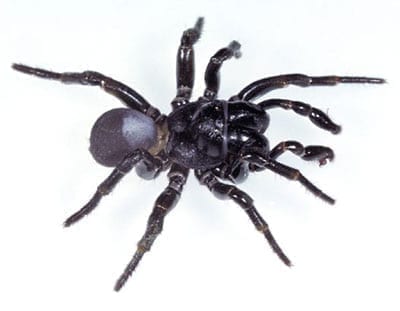 They are not often seen however, Mouse spiders (Missulena) are quite common in Queensland backyards. Often confused with the funnel-web spiders,these trapdoor spiders are quite different.

The three species of Missulena found in Queensland are:

Mouse spiders are stout spiders with either a black, dark blue body or black with a light grey/white patch on the top. Their heads are wide, shiny and black and sometimes they have a red or orangey eye region. The leg span varies from the size of a 5 cent coin up to the size of a 20 cent coin.

Why they are often unseen is due to the fact that they create very well concealed, silk lined burrows in lawns and open ground. These burrows can be from 20cm to 55cm deep and contain two separate trapdoors, often closed with web. The web tube falls onto the ground, becomes soil encrusted and therefore well-camouflaged. These burrows can be most often found in lawns after rainfall by looking for small mounds of soil beside a well concealed tube. The purpose of these burrows is dual; they offer a safe refuge from predators, as well as providing a safe place for their young (the egg sac and spiderlings).

Most homeowners come across mouse spiders when digging gardens or turning over the soil.

The redheaded mouse spider has the largest distribution area due to the fact that it’s spiderlings are able to aerially disperse over kilometres rather than walking as other species do.

When are they around?

From late Summer to the peak period of April-May the males can be seen wandering around backyards and quite often fall into swimming pools while seeking out females.

If disturbed, the mouse spider will become aggressive and quickly rise to a striking position.

As with any spiders around the home and in the backyard, mouse spiders should be treated with the appropriate amount of respect and caution, particularly if you have children around.

Most results of mouse spider bites have been relatively harmless with an infected bite area and initial pain, however reactions in young children may be more pronounced.

If someone is bitten, try to identify the type of spider and seek medical attention should the person be in extreme pain or begin to suffer with breathing difficulties. In serious cases the funnel-web spider antivenom can be administered to treat a mouse spider bite.

Save a PDF to
your computer

opens pdf for
you to print